Our stab proof vests are lightweight, highly protective and easy to conceal for maximum comfort and protection. We have taken every detail into account in producing these designs, so you will have unlimited mobility, total discretion and protection from stabbing and spikes up to NIJ level 3.

They are commonly worn by a wide range of professions like police officers, paramedics, door supervisors/bouncers and security staff.

Stab vests are made to protect against threats from screwdrivers, needles, knives, ice picks etc. Our stab proof vests are blunt trauma resistant to hits, batons and other blunt objects. This is unique for a stab proof vest

What is a stab proof vest?

A stab proof vest, or stab vest, is a reinforced piece of body armor, worn under or over other items of clothing. It is designed to resist knife attacks to the chest, back and sides.

Stab proof vests are made to offer protection against stabbing with sharp-tipped objects such as needles, knives and slashes. They are designed to prevent serious injury by prohibiting knife penetration beyond a few millimetres.

Furthermore, it will also protect against punches and batons, which can be seen in this video.

Can a stab proof vest stop a bullet?

If you’re looking for at stab- and bulletproof vest, we suggest the PGD-Ultra.

Many professions wear stab vests. Police officers are one of them, but it is also very common for paramedics, security staff, traffic wardens, environmental wardens, customs officers, immigration officers, bailiffs, cash in transit officers, door supervisors/bouncers, or anyone who else may be under threat, to wear a stab vest.

You should always look the vest carefully over for signs of damage - tears, smells, burns and creases - before you use it. Our Exoskeleton stab vest uses aluminium instead of aramid fibre, so the material doesn’t expire. Properly taken care of, the vest should last five years.

Can you buy stab vests?

Please educate yourself about the legality and restrictions on buying, owning and wearing body armor in your area, state or country. It is your responsibility to uphold the law. Here are a few examples from around the world:

In Australia, it is illegal to possess body armour without authorisation in South Australia, Victoria, Northern Territory, ACT, Queensland and New South Wales.

In the Canadian provinces of Alberta, British Columbia, Manitoba and Nova Scotia a license is required to possess body armour, though there are no such restrictions in the rest of the country.

In the European Union, ballistic protection that is considered ‘for main military usage’ is restricted to civilians.

In the United Kingdom, there are - pre Brexit - currently no legal restrictions on the purchase and ownership of body armour.

In the United States, it is legal to purchase and possess body armour, except for New York, Kentucky and Louisiana.

We don’t ship body armor to Connecticut because we are an online shop and body armor cannot be purchased online, by mail or over the phone.

Keep in mind that this is not to be considered legal advice nor is it an exhaustive list of all body armour regulations and laws in existence.

What does it mean, that the stab proof vest is certified?

This means for you that you get a stab proof vest, which has been in a professional laboratory and tested by professional equipment for stab resistant vests. This is done in such a way that a machine will drop a knife blade against the vest with a certain amount of pressure. The first pressure will be of 24 joules, and then at a maximum of 36 joules, this will be done several times for both pressures. To give a better idea of what joules is, it can be compared with throwing 1.9 kg from 1 meter and 93 centimeters in height. This is the pressure that the knife will drop against the stab proof vest. This is our assurance that we can provide a stab proof vest that we know with certainty has been tested properly. We have had a test done by an external laboratory as well as our tests done by us ourselves.

At a pressure of 24 joules, the knife should not penetrate more than 7 mm.

At a pressure of 36 joules, the knife should not penetrate more than 20 mm. 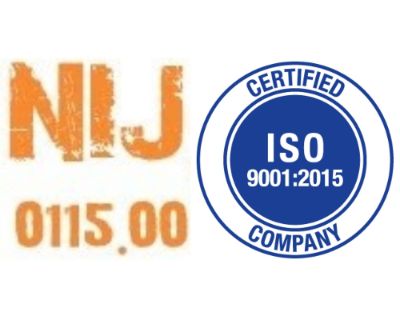